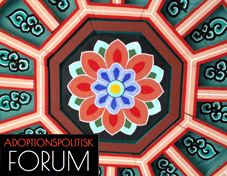 35 years ago, I was born in the middle of one of the most significant developmental projects the world has ever seen. Although I did not realize it at the time, I would witness the relatively quick transformation of South Korea from a poor agricultural society devastated by war to one of the wealthiest economies.

I was born in rural Korea, and the benefits of the “development miracle” had not trickled down to our household. Money and food were scarce. Due to economic hardship, I was placed temporarily in an orphanage. However, when my father showed up to claim me back, I had been adopted to a family in a far-off country. My father had no way to get in touch with me and I was too young to tell anyone that I was not an orphan who needed another family. I was not the only one who experienced this sort of displacement. Around 200,000 children from Korea were adopted to families overseas, most of them during the 1970s and ’80s.

So, at the age of three, I was forced along with thousands of children to do my part for the Korean development miracle. In order to be a suitable item for adoption my name was changed and my family history erased. Arriving in a foreign land, I had to forget my language, learn a new language, get used to a new diet completely unfamiliar to me, and forget about my life back in Korea. On the surface, I was a success. Within six months I spoke my new language fluently, and very shortly after, I had no tangible memories of Korea whatsoever.

Yet the pain lingered all those years. What happened to my family in Korea? Why I was I adopted? My adopted parents having no basis for understanding what I was going through just told me “Korea is a very poor country. Your family was probably poor, and the only reason they gave you up for adoption was probably because they only wanted the best for you”. So the years went on and I continued to accept this story, but the questions and the feeling of loss and pain never went away. I went through more than 12 years of birth search before I found my family. Since then I have been in Korea almost every year to visit family and familiarize myself with Korean society.

In getting to know my family’s history, and in digging into Korean economic history, I started to question the conventional narrative of a poor country which had no option than sending children overseas for better lives. Rather, my understanding of overseas adoption has now come to the point where I see adoption as a political choice to address the social problems that proceeded from rapid economic transformation.

The fact that the highest numbers of overseas adoption did not occur when Korea was among the poorest countries of the world, but rather during the time of radical and accelerated economic transformation is a factor that deserves further scrutiny. By 1980, when I was sent overseas for adoption, Korea no longer belonged to the poorest countries in the world. By then, overseas adoption had become a very effective tool for population control and limiting social welfare expenses by the government.

For my adoption, South Korea received several thousand dollars in good hard foreign currency. Foreign currency was tightly controlled by the state, because in order to industrialize, the government borrowed money from overseas and the loans had to be paid back in U.S. dollars. Thus every dollar earned was vital to the continued ability to industrialize.

It is estimated that overseas adoption contributed between $20 and $40 million in hard currency every year in the 1970s and ’80s. At that time, if any Korean company exported even $1 million in goods, they were acknowledged by the government. Also, by sending children of marginalized groups overseas for adoption, the government saved money on social welfare that could instead be reinvested in economic development.

Where does this understanding of Korean adoption history lead me to? It leads me to the conviction that adoptees contributed to the economic miracle and therefore we have a place in the history of Korean development and a right and an obligation to be critical of it. Our labor as adoptees contributed to the economy in line with farmers and workers in Korea who toiled in factories and the fields. Or the nurses, miners, farmers, soldiers and construction workers sent overseas to serve the Korean nation’s development agenda.

I have now visited Korea many times and I have spoken to many Koreans during these visits. Some Koreans I talk to feel sad for me, but very few truly understand my interpretation of modern history. “You also benefited from your adoption,” they say, “and you don’t know what life was like back then.”

True, I do not know what life was like back then in Korea, because I had no other option other than to forget. I did benefit materially from my adoption, but it does not diminish my role in the Korean development project. Many people in Korea also benefited from economic growth, but many also lost. It is the same with adoptees. Some of us were lucky to grow up in good families, but some grew up in hardship.

Others dismiss me as Western and elitist when I offer critique of Korean society. They see my critique as one of an outsider. But adoptees were and are to this day contributing to the Korean economy. We are not outsiders. Not only did we earn U.S. dollars and saved the government on social welfare spending through adoption. We continue to contribute to Korean society economically through our multiple trips back to visit our places of birth. We spend our money earned overseas in Korean hotels, restaurants, and so on. Some adoptees decide to return to Korea to live either for a period of time or permanently and they contribute to Korean society as workers, teachers, and professionals in different sectors.

Many adoptees first come to visit Korea through government supported “cultural trips.” We are presented with beautified and idealized images of Korean traditions, culture and economic success. We visit temples, palaces and shopping malls. We are told about the difficult past and the glorious present. We are put in high-end hotels and treated to lavish dinners. Representatives from government and adoption agencies greet us and tell us how proud they are of us and sometimes they ask us to once again help Korea by becoming “good ambassadors.” We should be proud of being “global Koreans” and “bridge builders” that can help Korea even more.

This kind of “appreciation” can seem flattering, but the palaces, luxury hotels and shopping malls do not fit well with where many of us came from: Marginalized families whose struggles have been silenced by shame, guilt and a lack of political voice. We are not invited to his part of Korea on homeland tours. Imagine if these government tours showed our real history? Then they would take us to orphanages, factory floors, single mothers, and dilapidated neighborhoods and villages. In this way for many of us, our history is still hidden from us.

Things have changed much since we were born. Korea has become richer, partly due to our contribution, but today’s Korea remains rife with economic inequalities, social stigmatization, and racism. Many of the structural injustices that led to our adoptions, are still alive and well in South Korea. Single women are still encouraged to give up their children for adoption and live in shame and silence. Migrant workers who come to this country to work and support their families back home are treated with disrespect and racism. Mixed race children are being treated as second-class citizens. The rich are getting richer and the majority is getting poorer. In fact, South Korea has one of the highest levels of income inequality among all OECD countries and the lowest spending on social welfare.

I no longer accept people’s claim that I am an outsider. We were one of many groups who had to sacrifice in the name of industrialization, and we were certainly too young to realize our sacrifice, or to make ourselves heard, but we have grown up and we have a voice now. For a long time, I was focused mostly on adoption issues, but adoption justice is not an isolated struggle. It is connected to all the other struggles of marginalized groups in this country.

As an adoptee, who now has a better understanding of how my adoption history relates to Korean development, my duty to Korea is to get involved with progressive movements working for a more just and equitable society. Many adoptees are doing the same. They are actively engaged in different kinds of political activism such as supporting single mothers, migrant workers, and adoptee justice. Hopefully adoptees will continue their involvement with other groups working for justice and equality in Korea. But it is a two-way exchange. Progressive Koreans also have to recognize our place in Korean society and history.

We may be outsiders in terms of language and culture, but our place in history as laborers for Korean development should be acknowledged. Hopefully this can lead to new alliances, new networks of solidarity and ultimately a more just society for all.

*Anders Riel Müller is a Ph.D. fellow in International Development Studies at Roskilde University in Denmark and the Danish Institute for International Studies. His dissertation work focuses on South Korea’s modern development from the perspective of the agricultural sector. He is a research fellow with Food First and Korea Policy Institute and an advisor to the Nordic Center for Renewable Energy. Prior to his Ph.D., Anders worked for almost a decade on rural development, renewable energy and climate change issues and co-founded two non-profit organizations. He currently splits his life between Denmark and Korea.