A Critical Voice of Transnational Adoption in Denmark 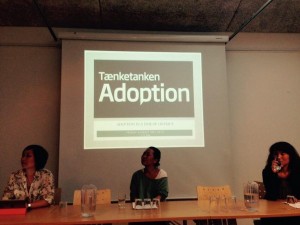 My name is Yong Sun Gullach, I am the present Chairwoman of Forum for Adoption Politics.

Thank you so much to Think Tank Adoption for inviting us to present our organization. It is a big honor to be among the pioneers and activists within the critical voice of adoption field tonight.

Forum for Adoption Politics is an organization open for everyone who questions the system of transnational adoption as being practiced in Denmark today. The mission of the organization is, among other things, to position adoptees as experts on our own lived experiences, knowing that adoptee voices should, as a minimum, become an equal part in the formulation of adoption-related policies. We wish to foster debate, which in the long run will lead to radical reforms of the system of transnational adoption.

The mission statement of Forum for Adoption Politics is:

Forum for Adoption Politics was founded in early 2014, has nine board members, and since its start has initiated several public events and projects. We emerged from a group of activists inspired by the activist adoptee communities in, for example, Korea, India, Denmark and USA. After starting as a Facebook group, Forum for Adoption Politics chose to formalize itself as an organization at the end of 2013, and in January 2014 we officially hosted the launch of our organization.

During our one and a half years of existence we have proved the need for an organization such as ours. Monitoring the work with the so-called “change of the law” on adoption in Denmark in the wake of several large scandals, and analyzing the political network of cooperation between lawmakers, adoption agencies in Denmark and the larger adoption lobby has demonstrated the importance of an adoptee lobby organization.

There is a need for Forum for Adoption Politics as a watchdog as:

Forum for Adoption Politics have no doubt there is a need to continuously pinpoint these issues politically, in the public debate, and last but not least on a private level – among ourselves – to remind us that we have a fundamental right to be heard, to be empowered and to be acknowledged. The fight will continue. Thank you. 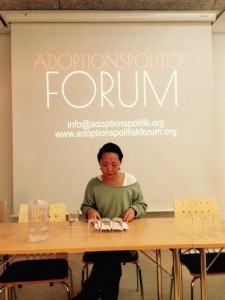 The speech was given at an event called “Adoption in a time of critique” at Korea Klubben, the Danish Association for Korean Adoptees, celebration of its 25th anniversary. In connection with the festivities Tænketanken Adoption [Think Tank Adoption] hosted a seminar on adoption critique. The seminar featured short presentations that highlighted some of the issues and questions that have become central to the political movement of critical adoptees in Denmark.

Tænketanken Adoption is an independent think tank committed to produce and disseminate critical knowledge on adoption to the Danish public. The think tank is organized by a collective of adult transnational adoptees. For more information see our website: http://www.taenketankenadoption.dk/